Own publications, collaborations and notable references

A company called Nesplora has two CPTs that are administered in virtual reality. Children ages 6–15 can be administered Aula (Climent et al., 2011), which places them in a virtual classroom with a teacher, classmates, and all the furnishings of a classroom. They are asked to respond to some tar- gets that they hear or see on the blackboard and ignore other stimuli, including traditional classroom distractions like peers talking, things happening outside the classroom window, and other students passing notes. Adolescents over the age of 16 and adults can be administered Nesplora’s Aquarium (Climent, 2018), which takes place in a virtual aquarium and has more cognitively demanding and challenging rules for responding to targets that test not only attention but also working memory. Recall that working memory is related to Mirksy’s encode concept, meaning that Aquarium is tap- ping into multiple layers of Mirsky’s attention model. At this point, these are the only commercially available CPTs administered in virtual reality; they have the advantage of modeling real-world atten- tion demands and distractions in a way that is hard to replicate with traditional CPTs administered on desktop and laptop computers. 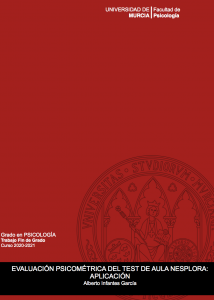 Previous studies have revealed that attention and inhibition are impaired in individuals with elevated symptoms of depression and anxiety. Virtual reality (VR)-based neuropsychological assessment may be a valid instrument for assessing attention and inhibition given its higher ecological validity when compared to classical tests. However, it is still unclear as to whether a VR assessment can predict depression and anxiety with the same or higher level of effectiveness and adherence as classical neuropsychological measures. The current study examined the effectiveness of a new VR test, Nesplora Aquarium, by testing participants with low ( N = 41) and elevated ( N = 41) symptoms of depression and anxiety. Participants completed a continuous performance test where they had to respond to stimuli (species of fish) in a virtual aquarium, as well as paper-and-pencil and computerised tests. Participants’ performance in Nesplora Aquarium was positively associated with classic measures of attention and inhibition, and effectively predicted symptoms of depression and anxiety above and beyond traditional cognitive measures such as psychomotor speed and executive functioning, spatial working memory span. Hence, VR is a safe, enjoyable, effective and more ecological alternative for the assessment of attention and inhibition among individuals with elevated anxiety and depression symptoms.
Créditos: Voinescu, A., Petrini, K., Stanton Fraser, D. et al. The effectiveness of a virtual reality attention task to predict depression and anxiety in comparison with current clinical measures. Virtual Reality (2021)
https://doi.org/10.1007/s10055-021-00520-7
2021

Cognitive and Emotional Mapping With SEEG

EFEC'O questionnaire is an instrument that allows assessing executive functions from an ecological perspective because it is based on a day-by-day behavioral report of an individual. The aim was to validate EFEC'O questionnaire in a self-report format. Participants were 250 Ecuadorian adolescents aged between 13 and 18 years (3/a?e=16.23. SD=\.Ti). As results, there was found a significant internal consistency (a=.64-.95), correlation among items (r=.32-.62), correlation among sub-scales (r=.40-76). confirmatory factor analysis of two factors (x2=3S.S7, CFI=98, RMSEA=. 065 [035-094], SRMR=027) and discriminant capacity in monitoring, cognitive flexibility. organization of material, initiative, working memory and planning of adolescents with differences on academic performance. In the discussion part, results are presented in relation to previous findings and taking on account the importance of having an instrument with an ecological validity to assess executive functions.
Créditos: Ramos-Galarza, Carlos & Bolanos-Pasquel, M. & García Gómez, Andrés & Siiarez, P.M. & Jadan-Guerrero, Janio. (2019). Efeco scale for assessing executive functions in self-report format. Revista Iberoamericana de Diagnostico y Evaluacion Psicologica. 51. 83-93.
https://doi.org/10.21865/RIDEP50.1.07
2020

… AQUARIUM, es semejante a AULA. En este caso se trata de un acuario donde se mide los procesos de atención para edades de análisis entre los 16 y los 90 años 11 . … Attention deficit disorder and hyperactivity (ADHD) is the main reason for consultation in most Pediatric Neurology units in Spain. The new technologies also associate benefits for both patients and professionals and the health system itself, which makes its rational implementation essential. Genetics, neuroimaging or virtual reality, for example, are clear exponents of the results that can be achieved by optimizing traditional processes. The different technologies that we collect in this article are fully operational and have thousands of experience in patients. The incorporation of them to the usual clinical practice is in our hands.
Créditos: Fernández, Manuel & Morillo, María & Gilibert, Noelia & Carvalho, Carla & Bello, Sabina. (2020). The technological tools of the diagnosis and treatment of attention deficit disorder and hyperactivity. Medicina. 80 Suppl 2. 67-71.
http://www.scielo.org.ar/pdf/medba/v80s2/v80s2a15.pdf
2020 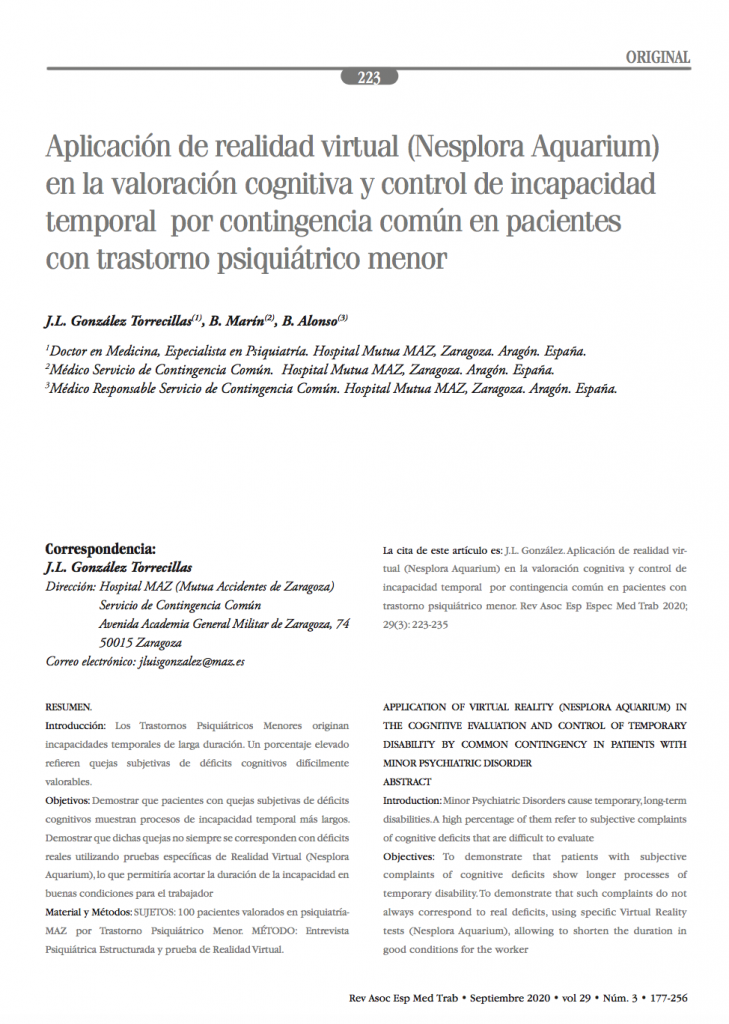 Attention deficit hyperactivity disorder (ADHD) is a neurodevelopmental disorder that is highly prevalent in children and adolescents, with estimated prevalence ranges from 5.9 to 7.1% globally and 1 to 6.8% in Spain. This has commonly been associated with deficits in attention threads and executive functions. This paper aims to study the cognitive-executive performance of adolescents between the ages of 17 and 23 with an ADHD diagnosis, relative to a control group. The total sample consisted of 120 male participants who were given the Nesplora Aquarium test. Dual execution tasks assessed attention, response speed, and inhibition capability. When comparing the experimental and control groups, statistically significant differences were detected in processing speed, selective attention, and cognitive inhibition [general execution (T_correct_n) (p ¼ 0.008), attention arousal (T_omission_n) (p ¼ 0.008), and processing speed (T_correctreactime_mean) (p ¼ 0.008)]. We demonstrate that a new virtual reality tool, designed to measure attention in people over the age of 16 years, is effective at measuring attention and working memory. In addition, item difficulty and discrimination values were also acceptable.
Créditos: Jose Antonio Camacho-Conde & Gema Climent (2020) Attentional profile of adolescents with ADHD in virtual-reality dual execution tasks: A pilot study, Applied Neuropsychology: Child
https://doi.org/10.1080/21622965.2020.1760103
2020

The current case study investigates whether successful psychotherapy for posttraumatic stress disorder (PTSD) symptoms will also ameliorate cognitive de cits. We describe the treatment response of a 37-year- old woman diagnosed with PTSD who received eight weekly EMDR sessions. At pre-treatment, the patient reported emotional disturbance on the Beck Depression Inventory-II, and problems with anxiety and sleep. Testing showed high scores on the State-Trait Anxiety Inventory and the Symptoms Scale of Post-traumatic Stress Disorder Scale-Revised. An evaluation of her attention pro le and other executive functions was conducted with dual execution tasks using a virtual reality program, Nesplora Aquarium. The attention testing data indicated attention-de cit disorder. At the end of the therapy, testing showed improvements in sleep problems and in emotional disturbance and anxiety symptoms on all measures. The attention testing revealed normal scores for her age range in the Nesplora Aquarium test. A follow-up assessment was carried out at 1 month, and it was observed that the patient maintained the improvement achieved. We discuss the relationship between PTSD and cognitive impairment and the value of the Nesplora Aquarium test for cognitive assessments. Our results suggest attentional de cits in this case when performing a continuous execution test with dual execution components that involve the participation of the central executive system of working memory.
Créditos: Camacho-Conde, José Antonio. Cognitive Function Assessment of a Patient With PTSD Before and After EMDR Treatment. Journal of EMDR Practice and Research. 10.1891/EMDR-D-20-00022
DOI: 10.1891/EMDR-D-20-00022
SEE MORE