Test for the evaluation of attentional processes and working memory in adults with a versatility of application in pathological as well as in normal and transitory processes.

The most complete test for attentional processes in the adult population

Attention, impulse control, memory or the ability to adapt to new situations are processes that are affected in the presence of pathologies or transitory situations. Measuring them objectively allows us to decide with greater precision what type of training or rehabilitation will be convenient to carry out. 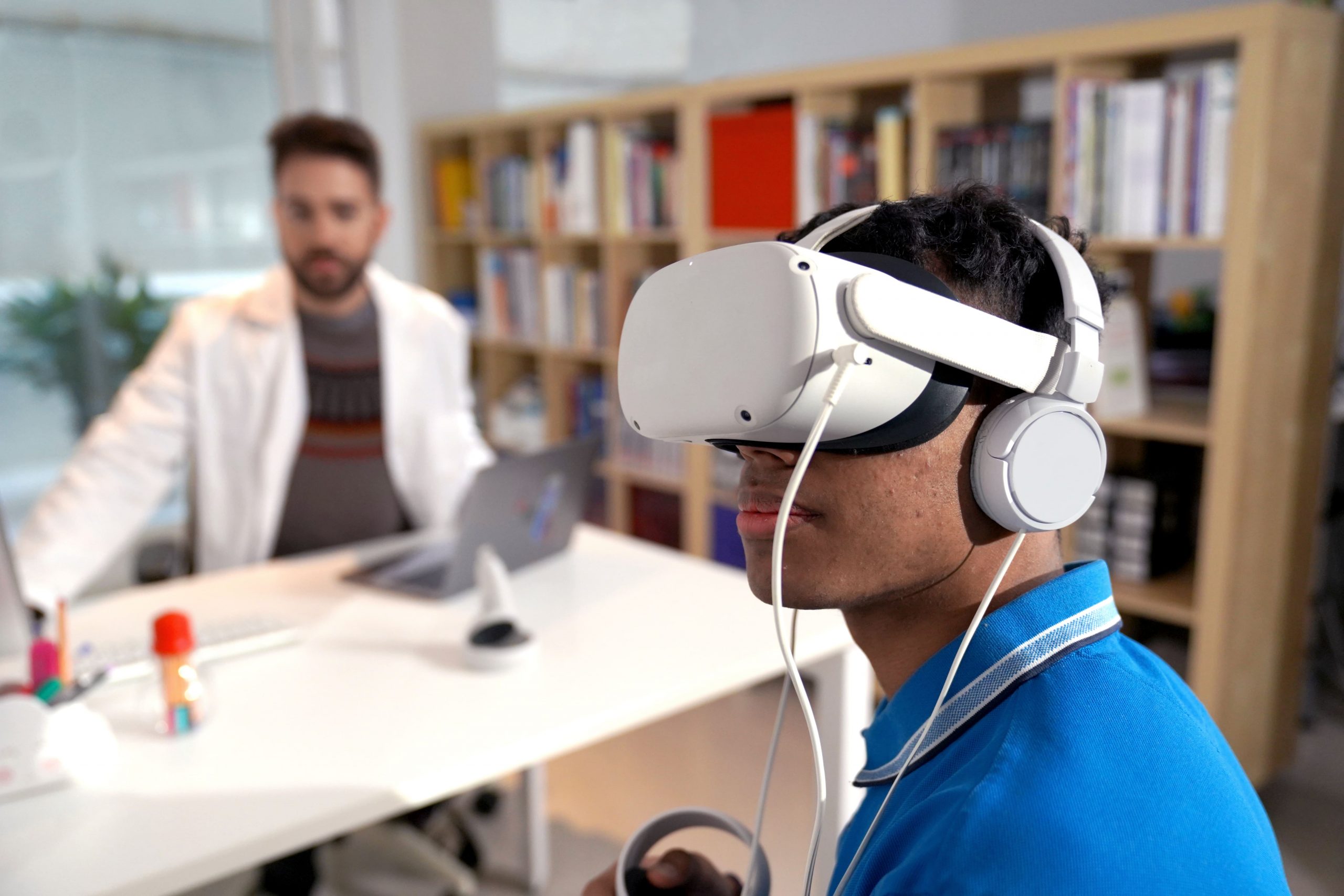 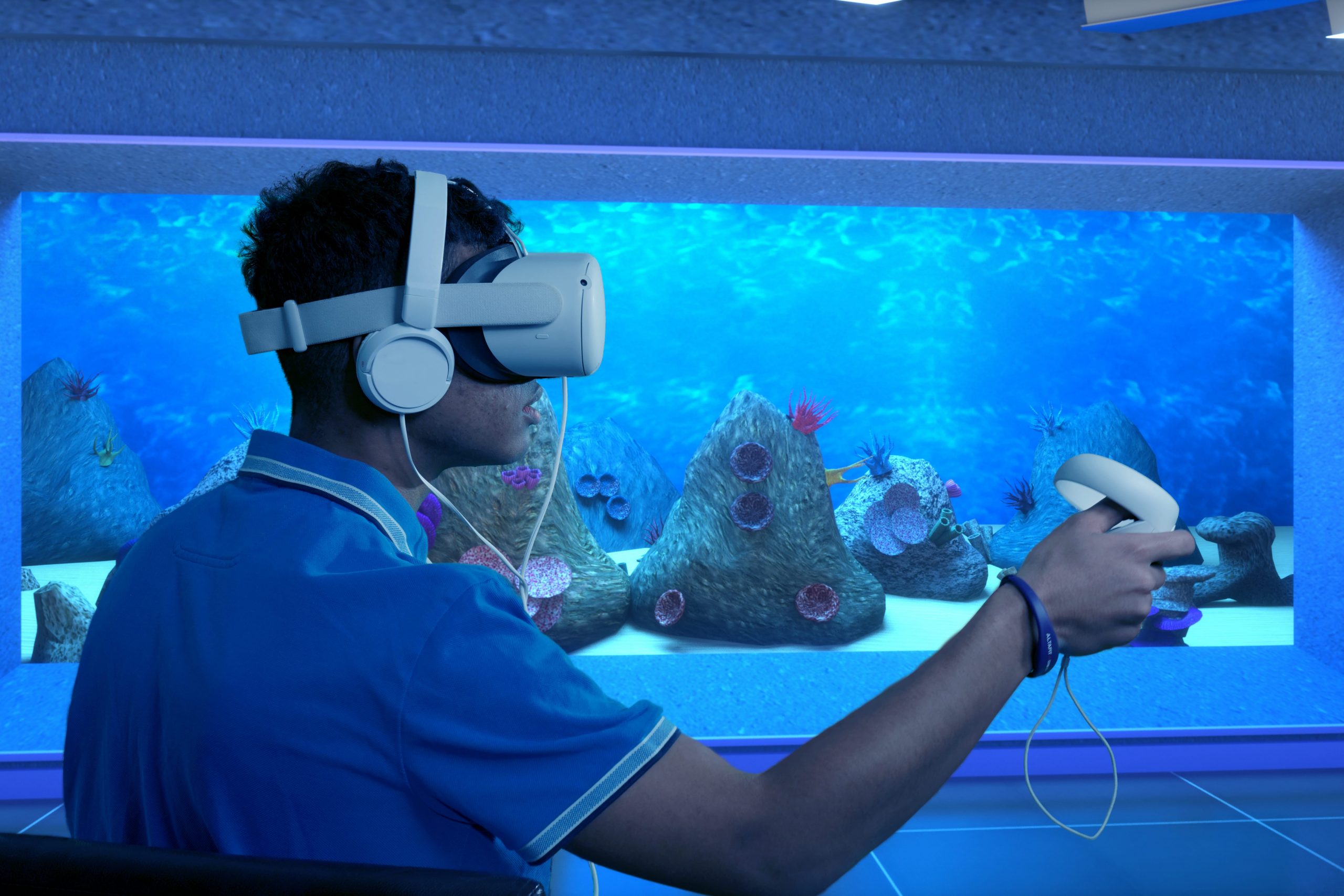 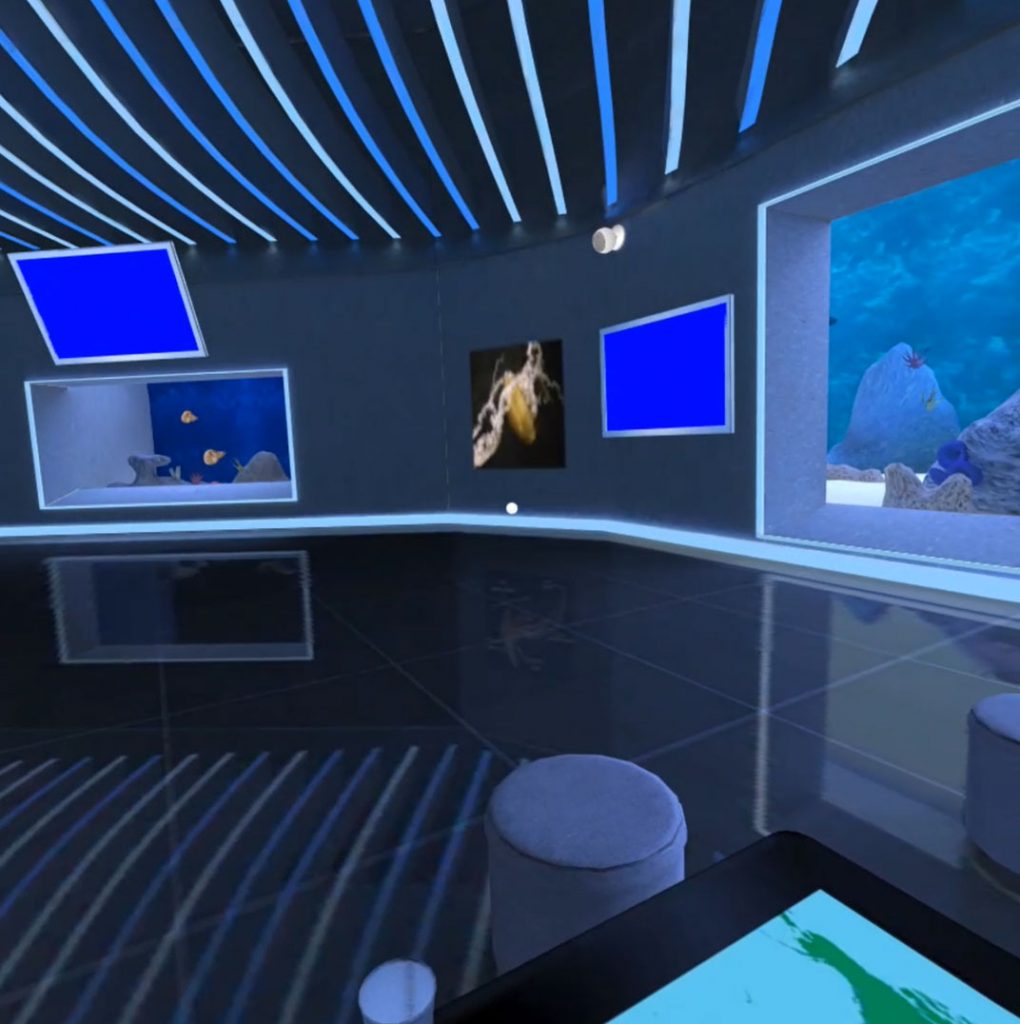 Description of the test

In the Attention Adults Aquarium test, two different continuous performance tasks (CPT) including dual performance tasks are performed. The evaluator visualizes in real time on the computer screen what the patient is seeing through the headset, which is also equipped with sensors to record movement during the test.

In the tasks, the stimuli presented are the same -fish or names referring to them-, although the target stimulus changes. The choice of these stimuli responds to the need for a test free of cultural bias and literacy problems. Neutral stimuli are chosen, which are presented at the beginning of the test, and the first training is intended for the person being tested to learn and assimilate them in order to be able to perform the test correctly.

In the tests there are different paradigms regarding the presentation of the target stimulus: on the one hand, during the learning task, the person must respond whenever the target stimulus is preceded by another stimulus, for example “press every time you see the number five preceded by the letter A -paradigm AX-. On the other hand, in the two dual performance tasks, the subject has to respond to everything except when a certain stimulus appears -paradigm Xno-.

Description of the virtual environment

The patient is taken to a 360º aquarium, under the premise that it is his or her first day of work there and he or she will have to check the fish tanks. The test is carried out in this virtual scenario where the person must press a button when they see or hear certain fish or certain words, depending on the instruction. During the test, there are several distractions typical of an aquarium (visitors walking around, announcements over the loudspeaker, etc.).

The objective of the Nesplora Aquarium normative study was to identify the different groups in the sample based on the scores obtained in the execution of the test, and to establish the normality curve for each of them. In order to carry out this normative study, data from 903 subjects were initially analysed. With the data obtained, an analysis of variance was carried out which showed that three age groups had to be made: from 16 to 40 years old, from 41 to 60 years old and over 60 years old; according to the differences found between their scores. Subsequently, it was found that “intra-group” there were no statistically significant differences in the different variables according to age and there were significant differences between the three groups. Significant differences were also found within each age group according to sex. Therefore, each age group has two different scales for men and women. Currently, the total sample has 1469 people.

Depending on the groups (psychologists, neurologists, psychiatrists, etc.), potential users of the tests, the results were ranked in percentile scales and T-scores. In order to facilitate the interpretation and comparison of results, it was decided that the T-scores should be normalized, despite the fact that most of the variables do not follow a normal distribution.

Reliability studies of the scales

This test presents certain special characteristics that, in some aspects, bring it closer to an “adaptive” type of test, since the time of presentation between stimuli, the appearance of distractors, their frequency, etc. depend on the sequence of responses given by the person. In many respects it could be said that the subject may actually be responding to a “different” test. This, which considerably improves the ecological validity of the test and its real efficacy, makes it difficult, however, to estimate the reliability of all the measures scored, at least in what is traditionally understood as the reliability coefficient of a test. This is why it is only possible to estimate classical reliability for the scales shown below. However, if these are reliable, in turn, they also guarantee the reliability of the rest of the aspects scored.

These disorders are increasingly common in our society and high levels of anxiety or depression are often associated with cognitive impairment in several domains, including attention. In both conditions, an impairment in sustained attention is observed. In addition, in cases of depression, a slowing of information processing is also observed. On the other hand, in anxiety disorders, working memory is also compromised. Nesplora Aquarium allows you to track the cognitive status and observe changes in the cognitive profile of the person being evaluated.

Two thirds of children with ADHD continue to suffer from the disorder into adulthood. This has negative repercussions in important areas surrounding the person, such as in their work environment, their social relationships, their family environment, etc. Nesplora Aquarium is a very useful tool when carrying out or complementing the diagnosis of ADHD in adults and adolescents over 16 years of age in an ecological setting, providing objective and reliable data.

Selective attention, cognitive inflexibility, impulsivity or excessive self-control are, for example, some of the variables that Aquarium measures that are compromised in the presence of eating disorders. Evaluating these variables will be of great help when planning a treatment tailored to each patient.

Bipolar disorder is another illness characterized by its symptoms at the emotional level. However, the repercussions it shows at the cognitive level are clear with respect to certain components, among which are sustained attention and working memory. The ability to inhibit responses is also altered. Nesplora Aquarium provides information on the attentional profile of people with bipolar disorder, facilitating its monitoring, since a correct cognitive functioning directly influences the autonomy and quality of life of patients.

Schizophrenia and other psychotic disorders

People with a psychotic disorder such as schizophrenia, suffer, along with the characteristic symptoms of this pathology, a global neuropsychological deterioration in which the most striking findings belong to the attentional deficits from the initial stages of the disease. Sustained and selective attention, working memory, processing speed and cognitive flexibility are frequently altered. Nesplora Aquarium evaluates the cognitive profile so that, once stability is achieved with respect to the positive symptoms, we can intervene in these cognitive processes to promote the autonomy and well-being of these patients.

The quality of life of people suffering from brain damage is highly impaired and it is of vital importance to know in depth what their cognitive state is at all times, in order to intervene in the most appropriate way. The alterations manifested after a brain injury can be very varied, with those observed at the attentional level being the most common. Specifically, sustained attention, working memory and processing speed are the functions that are usually observed to be altered, as well as difficulty in working with different stimuli simultaneously. Nesplora Aquarium makes it possible to monitor the rehabilitation being carried out and quantitatively record the person’s evolution.

Several neurodegenerative diseases show attentional deficits. Parkinson’s disease, Alzheimer’s disease, Multiple Sclerosis or other less common diseases such as Wilson’s disease can present alterations in attention, working memory, task switching cost, etc. Hence the usefulness of Nesplora Aquarium when evaluating these elements of the cognitive profile of people with different neurodegenerative disorders, as it allows us to go deeper into the cognitive profile of each patient in order to be able to follow up their condition and even monitor the treatments or interventions that can be applied.

Cases of MCI or early stages of dementia, would present in Nesplora Aquarium a low performance in reaction time, working memory, task switching cost or perseverations. In addition, different cognitive profiles have been observed depending on the type of dementia: cortical, subcortical, etc. Deficits in attention and working memory are good predictors of conversion from MCI to Alzheimer’s disease.

Get to know the report in detail

View and download an example of the report you get automatically after an evaluation using Nesplora Attention Adults Aquarium.

Interpretation of the data 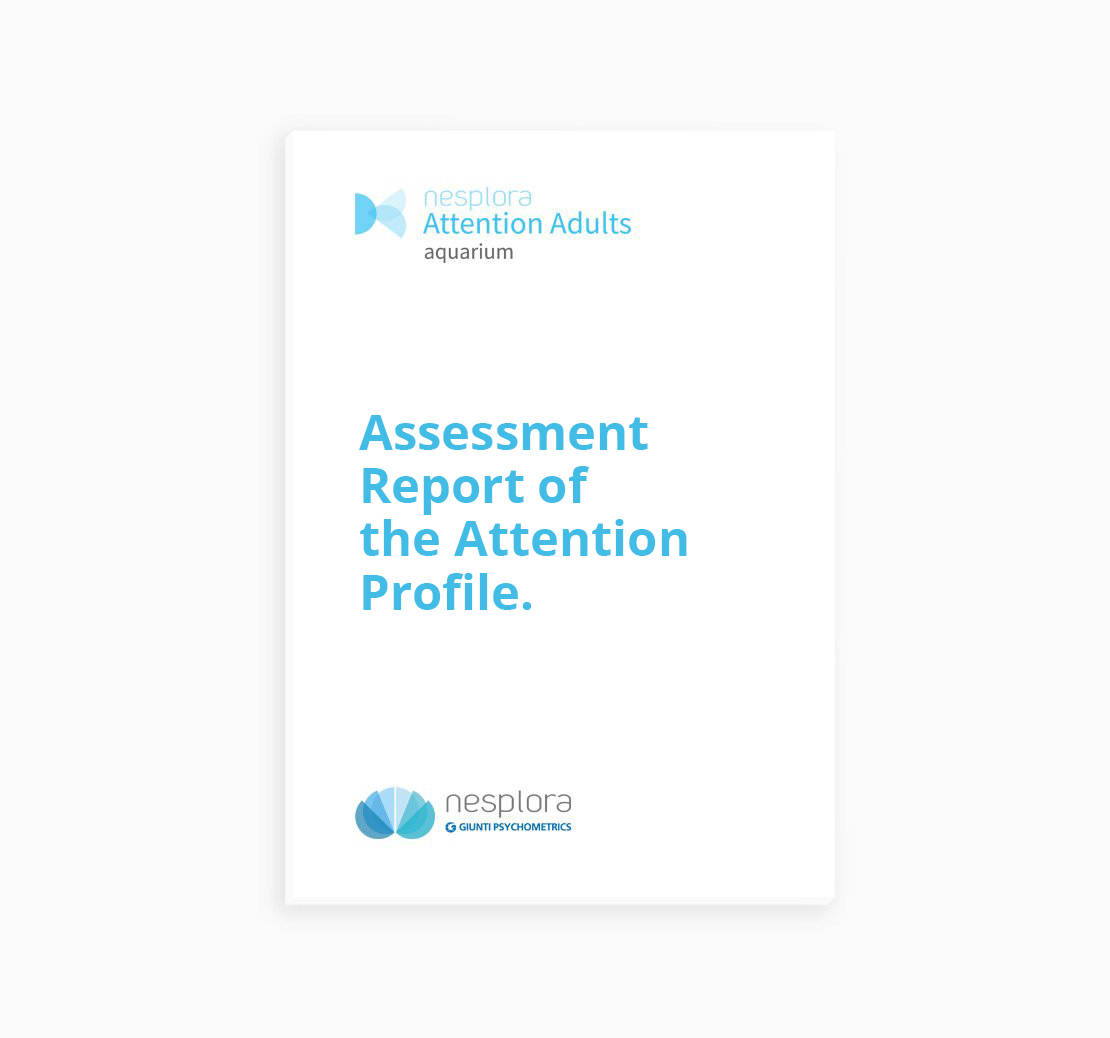